Useppa Island is an island located near the northern end of Pine Island Sound in Lee County, Florida. It has been known for luxury resorts since the late 19th century, and it is currently the home of the private Useppa Island Club. On May 21, 1996, it was added to the U.S. National Register of Historic Places, due to its archaeological significance.

In the early 1830s the island was variously called Caldez’s Island, Toampe, and Joseffa. Records indicate that José Caldez, who had operated a fishing rancho on the island, called it Josepha’s when he sold it in 1833. The name Useppa first appeared on a hydrological chart of the area in 1855.

Like the nearby islands of Gasparilla, Sanibel, and Captiva, a folk etymology has developed connecting Useppa Island’s name to the legendary pirate captain José Gaspar, also known as Gasparilla. A local folk story, extant in at least two versions, tells of Gaspar kidnapping a Spanish princess, with whom he becomes enamored. When she spurns his advances he kills her, but is overtaken by remorse and buries her himself on the beach. One version identifies the princess as Josefa, daughter of Martín de Mayorga, Viceroy of New Spain from 1779 to 1782, and indicates that her burial place of Useppa Island still bears her name in an altered form.

Useppa Island is 1.7 km long north to south, and up to 0.56 km wide. A ridge, up to 18 feet (5.5 m) high, runs along much of the eastern edge of the island. A ridge up to 10 feet (3.0 m) high is in the middle of the island along the western side. A 9 m tall conical shell midden with ramps is located on the west side of the island towards the southern end. The southern end of the island may have grown by as much as 500 m during the 20th century, possibly when a golf course was developed there. The island was part of the Florida mainland during the last glacial period, when the sea level around Florida was 100 m or more lower than today. Useppa Island is high ground that became separated from the mainland by a rising sea level around 4500 BCE. This high ground is believed to be stabilized sand dunes formed during a high sea level episode prior to the last glacial episode. During the period from 4500 BCE to 3000 BCE barrier islands formed to the west of Useppa Island, creating Pine Island Sound and protecting Useppa Island from the open Gulf of Mexico.

Before Useppa Island separated from the mainland, the area was visited by Paleo-Indians, who were present in Florida by at least 8,000 BCE. Soon after the sea level had risen enough to separate the island from the mainland, around 4500 BCE, Indians of the Archaic period began living on the island for part of the year, primarily during the spring and summer. Oyster shells were deposited in middens from this time. Tools made from seashells during the period from 4500 BCE to 3000 BCE show a cultural affinity with Horr’s Island to the south.

After about 3000 BCE bodies were buried on Useppa Island in a flexed position. Steatite stone vessels and fiber-tempered pottery came into use on the island after 2000 BCE. Sand-tempered pottery appeared after 1200 BCE. Seasonal occupation of the island continued through the end of the Archaic period (c. 500 BCE) and into the Caloosahatchee culture period, until about 1200. While the island may have been used occasionally as a fishing camp after that date, there is no known sustained occupation of the island until after 1700. Shortly after 1700, the Calusa people (the people of the Caloosahatchee culture region during the historic period) were killed, carried away to slavery, or driven out of the area by Creek and Yamasee people (who later coalesced into the Seminole.

Later in the 18th century and as late as 1835 Muspa Indians, possibly descendants of people who lived in the Calusa town of Muspa (on or near Marco Island) were reported to be living in the Charlotte Harbor and Pine Island area. Around 1784, Jose Caldez of Cuba began using Useppa Island as the base for his seasonal fishing operations. Caldez employed both Cubans and local Native Americans at this fishing rancho. By 1833 the ranchoconsisted of close to 20 palmetto-thatched houses and about 60 people.

The Second Seminole War began in late 1835. Henry Crews, the U.S. Customs officer on Useppa, was killed in early 1836, possibly by Seminoles or by Indians working at the rancho. Crews had been at odds with the Spaniards at the fishing rancho, believing that they were using fishing as a cover for large scale smuggling. After the death of Crews, the “Americans” living around Charlotte Harbor, which probably included Spaniards and ranchoIndians, fled to the rancho operated by William Bunce on Passage Island in Tampa Bay. In late 1836 the ranchos around Charlotte Harbor, including the Caldez rancho on Useppa, were reported to be abandoned and “largely destroyed.” Rancho Indians, including those who were married to Cubans or were half-Cuban, were gathered up by the Army and sent west to Indian Territory.

The area around Charlotte Harbor and Pine Island, including Useppa Island, remained sparsely inhabited for several decades. The U.S. Army established a fort on Useppa Island early in 1850, but abandoned it before the end of the year. The Army occupied Useppa Island again for a while during the Civil War. The Census of 1870 found two residents on the island. It was reported to be uninhabited in 1885, and to have one family in residence in 1895.

Chicago businessman John Roach built a hotel on Useppa Island in 1896. Barron Collier bought the island in 1911, and developed the resort, enlarging the hotel and adding tennis courts and a 9-hole golf course. Collier made the island his official residence, from which he directed his real estate empire. Collier died in 1939, and the resort was closed during World War II. Hurricanes in 1944 and 1946 damaged the hotel, and it was torn down. The island opened again as a resort in 1946, continuing until 1960. In 1960, Useppa briefly served as a CIA training base for Cuban exiles in preparation for the Bay of Pigs Invasion.

Useppa Island changed hands four times in the 1960s and 1970s, with two short-lived attempts to operate it as a resort. Gar Beckstead bought the island in 1976 and his company, Useppa Inn and Dock Company, has operated it as a private resort since then. Hurricane Charley heavily damaged the island in 2004. The rebuilt Collier Inn was re-opened one year later.

While some archaeologists passed by or visited Useppa Island in the 19th century, the first scientific excavation on the island was by John Griffin and Hale Smith, who collected ceramics from a disturbed midden in 1947. Jerald Milanich and Jefferson Chapman conducted more extensive excavations on Collier Mound and adjacent middens in 1979 and 1980, using a backhoe to dig trenches in mound and middens.

William Marquardt and Michael Hansinger conducted an excavation on Collier Ridge in 1985. Marquardt and Corbett Torrence excavated several locations on the island in 1989. Marquardt excavated a burial on a lot scheduled for construction in 1994. Volunteers associated with the Randell Research Society, the University of Southern California, and the Useppa Island Historical Society excavated a shell axe workshop on the island in 2006.  Credit Wikipedia

This is the lighter side of our web site were we examine some of the local legends of Pine Island and surrounding area; fact or fiction, you decide.

It is generally believed that Ponce de Leon was the first Spanish explorer to discover Pine Island and the Calusa Indians of this region.  The following is excerpted from the book, St. James City-The Early Years, and credited below.

“After his discovery of La Florida in 1513, he proceeded to sail south along the coast and rounded the peninsula and headed north to beyond “some islands which jutted out into the sea”.  Some historians believe those we near Tampa Bay, but most believe they were Sanibel and Captiva.  The expedition turned south and sailed along Sanibel beach and through the shoals into San Carlos Bay.  They then turned north and sail up through Pine Island Sound, at last dropping anchor along Pine Islands northwestern shore.  Ponce de Leon and his men spent the next 21 days on Pine Island in search of rumored treasure.”

In 1521 Ponce de León organized a colonizing expedition on two ships. It consisted of some 200 men, including priests, farmers and artisans, 50 horses and other domestic animals, and farming implements. The expedition landed on the southwest coast of Florida, in the vicinity of Caloosahatchee River or Charlotte Harbor. The colonists were soon attacked by Calusa braves and Ponce de León was injured when, historians believe, an arrow poisoned with the sap of the Manchineel tree struck his thigh. After this attack, he and the colonists sailed to Havana, Cuba, where he soon died of the wound. He was buried in Puerto Rico, in the crypt of San José Church from 1559 to 1836, when his remains were exhumed and later transferred to the Cathedral of San Juan Bautista.  Credit Wikipedia

Volunteer at Museum of the Islands

Volunteer Hosts needed for the museum. Meet and greet our visitors, and share the history of the islands. We are open Tuesday, Wednesday, Thursday, Friday and Saturday, and hope you will become part of our team. Phone us at 239-283-1525. 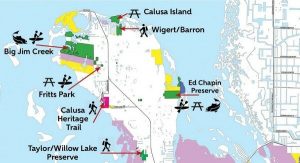 We had a great time at our Pirate Festival! Buried treasure, games, prizes, and costume contests. 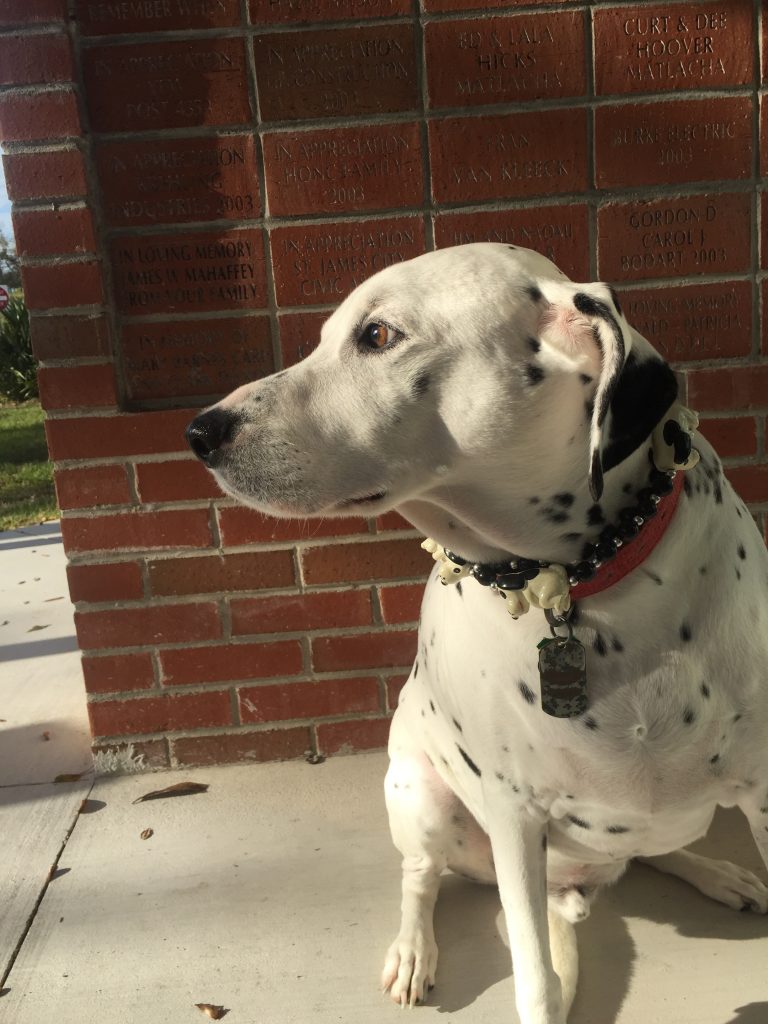 George Washington the Dalmatian is an official greeter on Tuesdays.

MOTI frequently hosts events ranging from our annual Christmas Open House to the Rhythm and Rummage Sale.  Please watch our calendar for these fun-filled days of visiting and shopping with our local artisans.

Donate to Museum of the Islands

Your support preserves our most precious resources for future generations. We are a 501c3 corporation.

We thank you for your donation, and look forward to seeing you in the museum. Please let us know if we may help you with anything.